Does Your Nose Grow with Age?

Fortunately, an expert facial plastic surgeon with extensive experience performing nasal procedures, such as Dr. Jonathan Kulbersh in Charlotte, can help reverse the effects of time on the appearance of the nose. Schedule a consultation today to learn more.

Dr. Kulbersh Answers the Question, “Does Your Nose Keep Growing?”

How does the nose change with age? 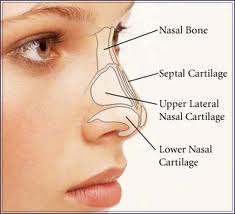 The skin of the nose actually becomes thinner, but the sebaceous component of the skin (glands that produce oil and sebum) increases.  The increase in the sebaceous skin makes the skin heavier and more vascular, which will cause the nasal tip to droop.

The bone that supports the nose from below, the maxilla, is slowly reabsorbed by the body and begins to shrink. This loss of support also contributes to nasal tip ptosis.

Does the Nose Really Grow with Age?

The answer to the question is both yes and no.  As one grows older, the nose does not “grow” but it changes in shape, which often makes the nose appear larger. As the support of the nasal tip weakens and the nose begins to fall, the nose appears longer from the side or profile view.  Additionally, it will make an existing nasal hump on the bridge of the nose appear larger or cause a small hump to appear as the tip falls.

The arrow pointing down shows the direction of the movement of the nasal tip as we age.  The red line shows the outline of the anticipated appearance of the nose after the tip falls.  This illustrates how the nose is longer from the side view and appears to grow as we age.

Can a Rhinoplasty Reverse the Signs of an Aging Nose?

As a Charlotte nose job specialist, Dr. Jonathan Kulbersh understands how critical it is to consider the effects of time on the nose after a rhinoplasty.  Depending on the age of the patient, a skilled facial plastic surgeon will determine which techniques will best address the patient’s concerns. A nose job performed on a patient that has a falling nasal tip secondary to the aging process is a very different operation than a young female seeking nasal refinement.

Generally speaking, a young patient with a large nose and hump will need the nose to be made smaller. An adult with a drooping tip that causes the nose to appear larger will need the tip lifted first to restore a youthful and refined appearance.  If additional changes are warranted, they can also be accomplished during the rhinoplasty procedure.  If the surgery were to be performed identically in both types of patients, the patient with the fallen tip could end up with a nose too small for their face. 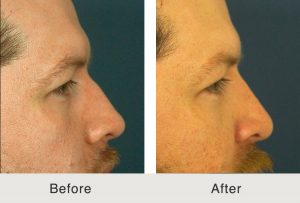 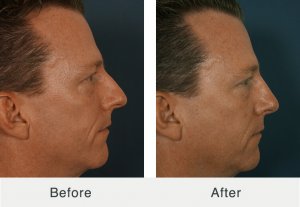 In some cases, a patient may be able to regain a more flattering and youthful appearance with a non-surgical rhinoplasty using injectable dermal fillers. As a simple in-office procedure, Dr. Kulbersh can subtly lift a droopy nasal tip, smooth away a nasal hump, or correct any crookedness or asymmetrical angles with strategically placed injections. 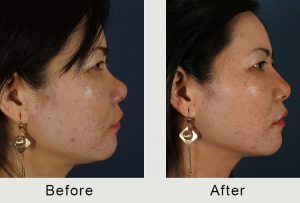 A non-surgical rhinoplasty is an ideal option for patients who do not want to undergo a traditional surgical procedure or worry about the recovery process that typically follows a nose job. The dermal filler treatment typically takes no more than 10 to 15 minutes and the downtime is just one to two days as any minor swelling or bruising dissipates.

Schedule a Consultation at Carolina Facial Plastics to Learn More

As a Charlotte facial plastic surgeon, Dr. Kulbersh understands the anatomical changes of the nose as it ages and will tailor the rhinoplasty procedure to achieve the desired results. Contact Carolina Facial Plastics to schedule an appointment.

Next read about Non-Surgical Rhinoplasty