What Are The Goals Of Ethnic Rhinoplasty? 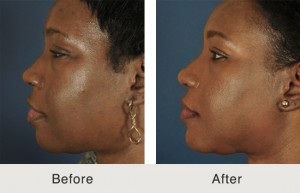 An ethnic rhinoplasty is a nose job performed on a patient who is not of Caucasian ethnicity.  This can be a variety of ethnicities: African American, Asian, Indian, Middle Eastern, or Hispanic.  Caucasian noses have similar anatomy as do each of the aforementioned ethnicities. Each race has a nasal structure unique to itself.

The most important end result for any ethnic rhinoplasty, no matter the race, is to create a nose that is harmonious with all the other areas of the face and without diminishing the patient’s cultural identity.

Ethnic rhinoplasty patients often seek a nose job for one the following reasons: nasal bridge augmentation, narrowing and reshaping of the nostrils, removal of any humps and depressions, and/or increase and define the nasal tip.

Dr. Kulbersh trained in Beverly Hills, CA with Dr. Paul Nassif, one of the most well-known and successful rhinoplasty surgeons in the world.  Beverly Hills is located within the bigger city of Los Angeles, CA—one of the most diverse cities on the planet.

People of every ethnicity flock to Beverly Hills to be treated by the surgeons to the stars, so Dr. Kulbersh has extensive experience treating all ethnicities and his training within such a diverse community allows him a unique insight when approaching each ethnic rhinoplasty procedure.

The main goal of any ethnic rhinoplasty should be to create a nose that is aesthetically pleasing and in line with the rest of the facial features, as well as holds true to the patient’s ethnic identity.

Different Features Within Each Ethnicity

Depending upon what part of the world the patient is from originally, meaning where his/her ancestors came from, the patient will exhibit facial features and characteristics from his/her family’s country of origin.

Asian noses typically exhibit a low flat bridge, wide nasal bones that manifest into a wide bridge at the middle of the nose, round and sometimes flat tip, thick skin, wide nostrils with thick outer walls, and soft, weaker cartilage.

Hispanic noses differ, depending upon the history of origin, meaning the ancestry within his/her familial tree. A family from Spain will have a completely different nasal structure than a family from Central or South America.

Spanish genes tend to have thinner and lighter skin, stronger nasal cartilage, and other features that are similar to the Caucasian nasal structure.

Hispanic patients with ancestors originally from South or Central America tend to have nasal features such as: a high bridge with a prominent bump, thick skin, wide nostrils with thick outer walls, a wide plunging flat tip, short upper lip, and a softer, weaker cartilage.

African-American noses are similar to Asian and Hispanic noses in that they often have a low, flat bridge, wide nostrils with thick walls, and a disproportional width compared to length.

Each ethnicity is so diverse in the build and shape of their face; it is of utmost importance to preserve their cultural identity as well as catering to the patient’s wants and desires.

When a patient comes for a consultation with Dr. Kulbersh, he ensures that the patient leaves with a complete understanding of the procedure and that both he and the patient are clear on the goals and outcome of the rhinoplasty.

Recovery from an ethnic rhinoplasty is 1-2 weeks and most patients can return to their daily routine 7-10 days after their procedure. After a month, the results of a rhinoplasty will start to show more prominently and the swelling could take as long as one year to permanently subside.

Once the results begin to show, the goal  is for the patient’s nose to be more aesthetically pleasing but the changes are so subtle that no one can pinpoint the exact change in his/her appearance.

Dr. Kulbersh’s detailed approach to a rhinoplasty on his ethnic clientele provides them with results that are tailored to their cultural ideals of beauty.  Many of his patients have an improved facial appearance, however, the changes are so minute that those closest to them are unsure what has changed.

“The mark of a good rhinoplasty is a beautiful appearance without the new nose being the obvious source of the new look.” –Dr. Jonathan Kulbersh

Schedule a Consultation with Dr. Kulbersh

If you are interested in scheduling a consultation with Dr. Kulbersh to talk about your options and are considering undergoing an ethnic rhinoplasty, please call Carolina Facial Plastics in Charlotte, NC at (704) 842-3644 or fill out the online consultation request form.

The Basics of Hair Loss and Treatment Options

The Basics of Hair Loss and Treatment Options
View All Videos